No Pre-Registration Required To Be In The Parade Register Pioneer Sunday By 1:00 PM KHS Band Performance in front of Fire Station 1:30 PM SHARP Parade Begins

You won’t want to miss the annual Pioneer Days parade in Kalida. The event is called one of Northwest Ohio’s largest and most colorful parades. Thousands of spectators watch the parade each year on Pioneer Sunday. The annual Pioneer Days parade starts at 1:30 PM SHARP on Pioneer Sunday. Tim Wehri and The Big Kahuna from 106.3 The Fox will be the emcees for the reviewing stand on Broad Street, while Joe Recker and Rick Kortokrax will do the duties on the South Fourth Street reviewing stand. Some of the parade units will include floats, antique and new tractors and cars, equestrian groups, high school marching band units, clowns, fire trucks and EMS vehicles, youth groups, athletic teams, 4-H groups, churches, civic organizations and local, county and state elected government officials. The parade route begins near Kalida Elementary on Fourth Street, goes from Fourth to Price Street, then to Water Street and on to Broad Street (East U.S. 224) through downtown Kalida and ends at Putnam Street just past St. Michael Catholic Church.
PARADE PARTICIPANTS: SAFETY DURING THE PARADE IS OUR NUMBER ONE PRIORITY! CANDY AND OTHER ITEMS MAY BE DISTRIBUTED ALONG THE PARADE ROUTE, HOWEVER, FOR THE SAFETY OF ALL, THROWING OF CANDY OR ANY OTHER ITEMS IS NOT PERMITTED. ALL ITEMS MUST BE HANDED OUT BY WALKERS. WE RESERVE THE RIGHT TO REFUSE ANY PARADE ENTRIES FOR ANY REASON DEEMED NECESSARY BY THE PIONEER COMMITTEE. 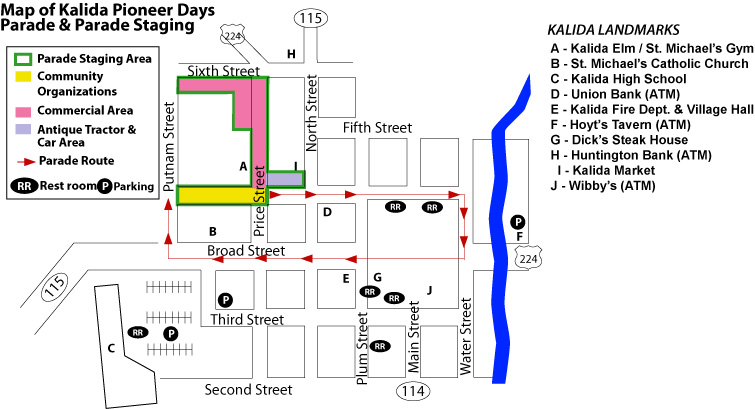